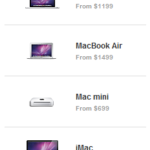 Often people say to me, “I think I’m going to get a Mac” because they’ve “had enough of Windows”.

Then I ask them, “How much did you pay for the computer you have?”

Then I let them know that they’re not likely to find a Mac at that price because the cheapest Mac, apart from the Mini which no Mac owner I know has ever considered, costs at least $1,000. Most Mac owners start with the MacBook Pro which costs anywhere from $1,200 to $2,300 depending upon the features you get.

For more information $1,200 computers, check out this article from PC World: “The Perfect PC: Don’t Buy It, Build It”. They discuss $500 machines briefly, then they elaborate on more expensive machines, even though they are talking about building your own computer.

FYI, I have an iMac and two PCs.