Following up to yesterday’s post on Augmented Reality Apps for Android and iPhone users: 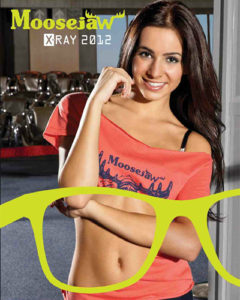 The Moosejaw clothing company has created a “Moosejaw X-Ray” app to go with their latest catalog. Download the app to your Android or iOS device, and scan the models in the catalog. On certain pages the clothed models will have their underwear exposed by the app. I tried it out (how could I resist) and found the x-ray images went from serious to funny. The male models in particular were ridiculous. One was revealed to have squid or octopus taped to their side, while another had bullet holes in his undershirt. You can install the app and then scan the image at left. Or you can try it on Moosejaw’s online catalog. The model images are 2D so there will be no peering around the back or the edges for the inquisitive or the infatuated. The next augmented reality app is fully 3D. For better or worse it kept me far too entertained. 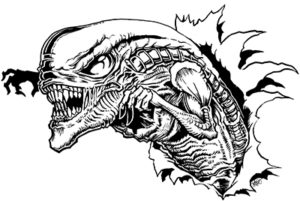 This app from Fingerfunk kept me busy. There is an image you have to download and print (shown left or download hi-res image). Print the picture and attached it to a t-shirt, then view it using the Chestburster app for Android or iOS (iPhone or iPad). You’ll hear some alarm bells, and then the famous baby alien chestburster appears to burst through the image with the appropriate R rated gore. The image is fully three dimensional, so depending on the angle of view you can view the top, bottom, or sides of the alien’s head. You can even see into the open cavity behind it. I’d print on a white t-shirt for the best effect. I had fun taking shots of the baby alien bursting out of my refrigerator. Oh, yes, there is a screenshot feature so you can save the image seen on your screen. Some samples to follow shortly.