Today, I am starting a series on ebooks and the digital readers. Maybe you didn’t notice, but there was a big jump in the e-book market last month.

Though e-book “readers” have been around for over 5 years already, they didn’t start to click with the public until the Sony Reader and the Amazon Kindle entered the scene. 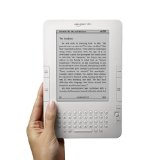 There’s no doubt the Kindle is well known, but the Sony Reader is far and away my favorite. The latest and least expensive reader from Amazon is the Kindle Wireless Reading Device (6″ Display and Global Wireless)

for $259. While the Sony Digital Reader Pocket Edition (PRS300SC)

Amazon only has one other Kindle to choose, and that’s the Kindle DX (with a 9.4 inch display)

Sony has two other models to choose from: The Sony Reader Touch Edition (PRS600RC)

for $499. While the Pocket Edition uses buttons for navigation, the Touch Edition has a touchscreen. Another nice feature for the Touch is a stylus for writing notes on the screen, and the expandable memory with memory chips like you find in a digital camera or smartphone.

The Sony Daily Edition is the only Sony model that has wireless capability like either Amazon Kindle device.

While wireless capability in either device is convenient for the sake of downloading books on the go, and there is no need to worry about the added expense of paying for 3G wireless service from AT&T since Amazon foots the bill for you. The device comes preconfigured.

Both the Sony and Amazon devices allow you to download ebooks from a PC or Mac with a USB cable.

The pros and cons come in with your choice of sources for getting books for your reader. The Amazon Kindle only works with Amazon, while the Sony Readers can get books from any of a dozen or more ebook sites such as www.ebooks.com, www.kobobooks.com (partnered with Borders Books), www.gutenberg.org, Sony’s Ebookstore, and the Google Library, to name a few, not to mention several free ebook sources, too.

I’ll have more information on the ebook readers and ebooks in the days ahead.