I thought this was pretty amazing, but the new iPod Nano (5th Generation) has a video camera in it. Yep, the new nano shoots video. Now, if you’ve seen the Nano, you know that it’s just a little bit bigger than a lighter. Imagine a video camera the size of a lighter.

And as you can see, it’s available at MacMall.com, the Apple Superstore.

Shameless plugs aside, let’s look take a closer look at the iPod nano.

The back of the new iPod Nano has a camera lens, and next to the camera lens there’s a pinhole. A pinhole microphone, that is. So you can shoot video with sound, too.

Three years ago, I bought a 2nd Generation iPod Nano, and I still use it to this day. Back then, $199 got you 8 GB of storage space for holding about 2,000 songs. The 2nd Gen iPod Nano didn’t play video. That was a bit of downer for me at the time, but I’ve lived with it.

Here we are 3 years later and the Nano hasn’t gotten any bigger, and now it plays video, and it records video.

What’s more than that? It plays FM radio now with a built-in FM tuner, and you can even pause the radio while you’re listening to a station. Think of it as Tivo for radio in an iPod. Apple calls this Live Pause. The radio is recorded onto the iPod, so you can pause a song while you listen. While the song is paused the station is recorded to the Nano’s flash drive. 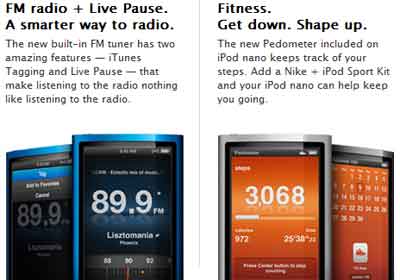 Now, that is amazing. I’m sold.

Head over to MacMall.com, the Apple Superstore

, and get your iPod Nano, now. There’s an 8GB model for $149 and the 16GB model for $179. You can also get a Free Altec lansing Portable iPod/iPhone speaker (a $39 value) with it. There’s also an option to get free engraving and a free charger. You pay for the engraving and charger now, but you get your money back from a rebate later.