I’ve often marvelled at the computer generated lines they draw across the fields in the football game broadcasts. Though not really expecting an answer, I’ve asked aloud during several broadcasts, “How do they do that? How do they draw those lines on the field.”

Inevitably, the answer comes back, simply, “With computers.” 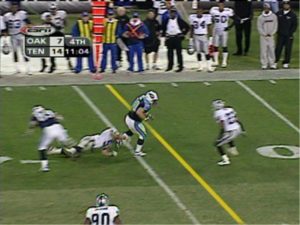 “I know that, but how do they do it. Look! The lines don’t even cross over the players, it actually appears underneath them as if it were actually on the field.”

That’s been the typical conversation  all these years, and I’ve come no closer to getting an answer. (Strangely, I’ve never Googled to find an answer.) Until today.

I learned that the first time this was done was during a game between the Baltimore Ravens and the Cincinatti Bengals back in Sept. 27, 1998. (Bengals lost.) That is a long time to be wondering about this without ever investigating. I should probably be embarrassed.

Turns out Matt Lake of the New York Times published an article about this 10 years ago. The article is titled, “When the Game’s on the Line, the Line’s on the Screen”. In summary, this is how it’s done according to Matt Lake’s report:

So that, in a nutshell, is how it’s done.  Amazingly, all this is done in about 3 seconds. The same technology is used to enter those little ads, which seem to be getting bigger, in the corners of the TV screens.

You can read Matt Lake’s New York Times article for the full story. There’s another article at HowStuffWorks.com, too.