One of the motivator’s behind my starting this blog is Jeremy Schoemaker, who more commonly goes by the name Shoemoney. Along with John Chow, Jeremy is considered one of the top earning bloggers on the Internet today. Since late January Jeremy has been offering a course — called the Shoemoney System — on the methods he uses to earn money on the Internet promoting other people’s products and services along with his own.

I’ve signed on to a few of his programs over the past year and a half, and I’ve found his methods and expectations to be quite realistic and very, very useful. While other courses and programs of this sort try to tell you it takes “no effort at all” or that you can “make millions in your underwear”, Jeremy is honest enough to say that it does take work, and it does take effort. While others ‘promise’ you can make thousands a month, Shoemoney realistically points out you can expect to earn a few hundred dollars a month using his system. While other programs take a “cookiecutter” approach, Shoemoney shows you ways to tailor his system to fit your own style and interests. 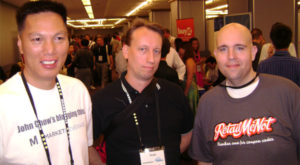 Follow this link to check out Shoemoney’s introductory video for the Shoemoney System.

Or check out his daily blog, Shoemoney: Skills to Pay the Bills, which also offers insights into his techniques.

Another very useful blog you can read is JohnChow.com: The Miscellaneous Ramblings of a dot com Mogul.

You may remember reading in one of my posts last August how I had the pleasure of meeting both Jeremy and John in person at the Affiliate Summit East in New York City.